That’s something Jackie Vetrano, the online marketing and social media manager at the University of North Carolina at Chapel Hill, understands very well. Vetrano dives deep into the metrics of the school’s social media activity to figure out what is and isn’t working.

“Social media data can be very useful…Once you put all the important numbers together, it gives you a better understanding of what’s going on,” says Vetrano, who recently presented on how to harness the power of social media at the 2018 College Media Conference.

Vetrano works in UNC-Chapel Hill’s central communications department and is part of a new team that includes two social media community leaders and her supervisor, the director of social media. Her role is to analyze the performance of posts on UNC-Chapel Hill’s accounts on Facebook, Twitter, Instagram, LinkedIn, Pinterest and YouTube, and use the insights to help shape the school’s social media strategy.

Vetrano echoes what many social media strategists are saying these days – don’t put too much stock in vanity metrics. She says while impressions and likes are important to gauging a post’s popularity, it’s essential to put the numbers in context.

“Likes have some weight because they’re like the audience giving a high five,” says Vetrano, who co-hosts the podcast Higher Ed Social. “But when you see a post get 60 likes, and that’s lower than some of your other posts, it’s not really that low if it only reached 100 people.”

What counts to Vetrano and her team is drawing people to visit and browse through the university’s website. So much of the social posts they share highlight new content on the site – research, videos, podcast episodes, etc.

“What matters to us is, did people click on the story we shared, how much time did they spend on the page, and did they then click through to other pages. Also, did we see an increase in unique visitors to the site because of our posts. The point of our efforts is to increase engagement with our web content,” Vetrano says.

UNC-Chapel Hill students and alumni have a strong sense of pride in their school, Vetrano says. That sentiment informs social media decisions – she knows posts about the school’s high-performing Tar Heels athletic teams will resonate, such as a Facebook post with the above image of cheering sports fans that links to a microsite for prospective students – it attracted 149 likes and seven shares. The Tweet below links to the same website and includes a video about life as a student at the school, and attracted 147 likes and 24 retweets. 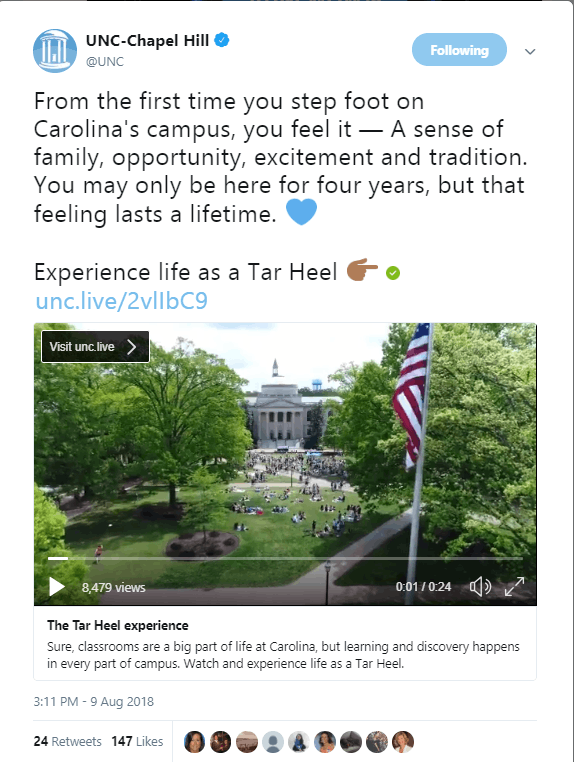 Vetrano and her team observed that one way some community members show their pride in UNC-Chapel Hill is by dressing up their dogs in school attire. So they came up with a campaign to build on that trend: #BarkTheSound, which is a nod to the school’s alma mater song, “Hark the Sound,” and invites UNC-Chapel Hill followers and fans to share their photos of their dressed-up dogs. Check out the impressive stats for the tweet of Tar Heel (the nickname for North Carolinians) pup Kona. 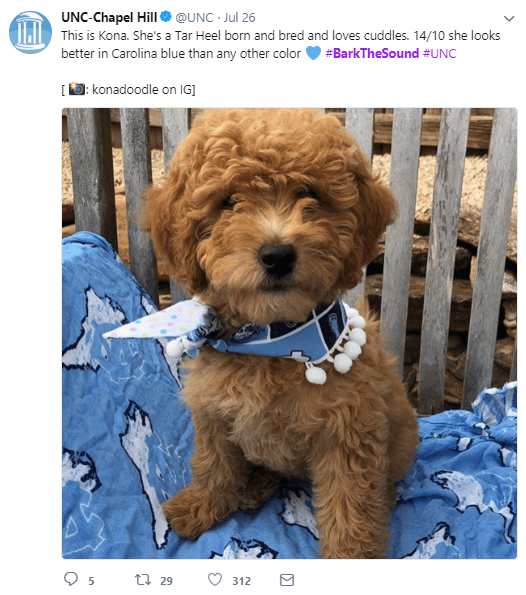 At the same time, Vetrano and her team will look beyond their local context for social media ideas and inspiration. That includes monitoring the accounts of other major higher education institutions, as well as prominent consumer brands like Wendy’s that have been effective at using social media to connect with their audiences.

For Vetrano, tracking the success of social media activity involves using basic tools of the trade: Hootsuite to schedule posts, Google Analytics to monitor web traffic, and the native data provided by the various platforms they use.

“You don’t need a lot more than that to understand what’s going on with your audience,” she says. “What matters more is using the data strategically and in creative ways to engage stakeholders.”