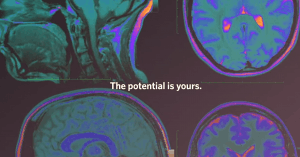 In the increasingly competitive global market of higher education, universities and colleges are constantly looking for new ways to differentiate themselves. So when an institution tries to reinvent its identity, it’s wise for higher ed communicators to take a close look.

Last month, the University of British Columbia, or UBC, in Canada launched the national advertising campaign “The potential is yours.” The purpose of the campaign is to demonstrate the importance of UBC’s research and teaching mission, and how the school is trying to tackle some of society’s most pressing challenges. Featuring a mix of UBC faculty and students, the campaign highlights work in areas such as clean energy, Alzheimer treatment and opioid overdose.

In a statement to The Ubyssey, UBC’s campus newspaper, Rick Hart, the school’s senior director of brand and marketing, said the following about the campaign: “The ads challenge the audience, as we at UBC challenge ourselves, to not accept the status quo.”

The centrepiece of the campaign is this 30-second national television ad:

A main driver of the campaign was improving UBC’s reputation after developments in 2015 and 2016 that attracted negative attention. These issues pertained to the sudden resignation of the school’s president in 2015, and concerns about its ability to handle cases of sexual misconduct.

For its development, about 5,000 people were asked what UBC means to them, including students, alumni, university leaders, prospective university students, general B.C. residents and business leaders. With an advertising budget of $1.25 million, the campaign will present in multiple formats: TV, newspaper, online video, digital advertising and social media. The campaign will run in two waves, from September to November 2018, and from January to March 2019.

So far, I think the most compelling aspects of the campaign are the seven Q&As with UBC students and faculty members featured on the campaign website. We learn from Gary Hinshaw, professor of astronomy and astrophysics, and winner of the 2018 Breakthrough Prize in Fundamental Physics, about his efforts to build a new radio telescope to create the largest-ever map of the universe. Balpreet Kukreja, a student in the Clean Energy Engineering program, shares about his exploration of fusion power and large-scale energy storage.

Toni Schmader, Canada Research Chair in Social Psychology and director of the Engendering Success in STEM Consortium, is examining how gender stereotypes and implicit biases affect women’s abilities to feel included and excel in science, technology, engineering and math. We also learn about Aaron Derrickson, a PhD candidate in Indigenous Studies who is studying effective forms of governance for Indigenous communities.

These stories demonstrate the wide range of ways educators and pupils at UBC are pushing the envelope in their respective fields. I would like to see some additional stories introduced from other academic areas, so that we have a better sense of the extent of UBC’s important research and teaching. It would also help increase the campaign’s impact if these stories were told in other formats beyond text, such as video.

I also think it would also be useful for the campaign to play up UBC’s most significant research and academic accomplishments. Some of these may be included within the Q&As, but I feel like we don’t understand quickly enough what UBC is doing that is especially innovative, unique or groundbreaking. I look forward to seeing what additional storytelling elements might emerge in the campaign’s second wave.