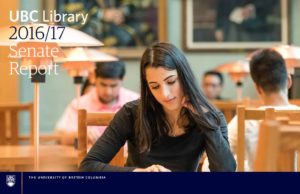 A big part of excelling in higher education communications means effectively telling the success stories of your institution. That’s something that the UBC Library at the University of British Columbia understands very well.

“We took a very strategic approach with this project to make sure it resonated with our primary audience,” says communications and marketing strategist Michelle Blackwell, who makes up a team of four that includes a director of communications, a communications officer and a communication and design specialist. Together, they work to reflect the activities and accomplishments of the library, which features more than six million volumes and 325 staff.

The team conducted research to figure out the best approach to take with the publication’s content and design. They interviewed key stakeholders, including members of the UBC Senate, the Library Senate Committee, librarians and student representatives, to determine what worked and what didn’t in the previous years’ reports. They also kept in mind their secondary audiences of faculty members, students, senior administrators, alumni and donors. As well, they reviewed similar publications by other academic libraries to assess current trends and best practices.

Based on what they learned from their investigation, the team decided to pursue a much more visual design and to significantly decrease the publication’s word count. More emphasis was placed on better reflecting the library’s most important priorities and data points.

Copy for the report was developed with the support of library faculty and staff, who shared information throughout the year on noteworthy activities, projects and milestones. These were turned into articles that were shared on the library’s website and social media channels, and that were then repurposed for the report. All of the articles are relatively concise, with some at a few hundred words, and others at a paragraph or two.

The report includes articles on topics such as making scholarly work more accessible; growing the library’s collections; improving student spaces; supporting researchers; and engaging with community partners. The content also includes graphic data on some of the library’s most important statistics integrated into different sections. 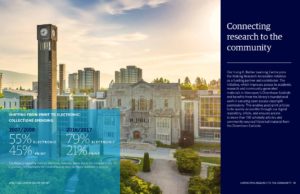 The 2016/17 report features a classic, elegant colour scheme of various shades of blue combined with white, which are in keeping with UBC’s institutional visual identity guidelines. All of the written content is complemented by large, striking images reflecting different people, scenes and settings on campus. The photos were pulled from the university and library’s Flickr bank of professional images taken by the university photographer. As with previous editions, the report’s page count remained between 16-18 pages, but the word count was cut significantly, by about 30%, including nine pages of appendices. Overall, it looks and feels more like a magazine than those published in previous years.

The communications and marketing team received expert advice on the report’s development from UBC Library’s assessment librarian, whose role is akin to being a business analyst for the library. He helped make sure the library’s story was told in an accurate and compelling way. He also helped guide the development and framing of the data points included in the report and through the complementary webpage for the report.

Another change: the team chose for the report’s publication date to coincide with the publication of UBC’s annual report. This would allow the library’s progress to be understood within the bigger picture of the institution’s progress.

The revamped report saw improvements over the previous year’s report to some key metrics: a 4.3% increase in traffic to the report webpage, and a 19% increase in the amount of time spent on the report webpage. There have also been more downloads of the report’s PDF version. The report also received qualitative feedback indicating that it captured the story of the library in a new and fascinating way.

“Our goal was to demonstrate the value of the library to the university, provide a snapshot of where the library is succeeding and struggling, and explain how the library is using its resources,” Blackwell says. “It’s heartening to know we’re moving in the right direction with this report.”