When a school ad campaign causes a stir

Sometimes, a marketing campaign hits the mark, causes a sensation and gives your school’s profile a boost.

Other times, it doesn’t quite hit the mark, but creates way more buzz than anticipated. Some of it’s good, some of it’s bad – but in the end, maybe all of it’s actually good.

This second scenario is what the University of Wyoming is experiencing right now. Last week, the school released its new ad campaign, The World Needs More Cowboys. The university’s mascot is a cowboy named Pistol Pete, and Wyoming is nicknamed the Cowboy State. The campaign celebrates this heritage while asserting we can all embrace the positive traits of cowboys.

“Drawing upon Wyoming’s proud heritage, this campaign redefines what it means to be a cowboy in this day and age, distilling it down to the inner spirit of curiosity and boldness that all who call themselves cowboys and cowgirls can identify with — no matter their race or gender, or whether they’re students, employees, alumni or other supporters,” UW President Laurie Nichols said.

This emphasis on a modern cowboy outlook that can apply to anyone is reflected in the campaign’s video:

The video is explicit in demonstrating that being a cowboy is about being strong and courageous, embracing wonder, persisting during hardship and being optimistic. It also includes women and racial minorities in its depiction of cowboys through both its visuals and narration, indicating “ours are diverse cowboys that come in every sex, shape, colour and creed.”

The campaign was produced with the help of Colorado marketing and advertising firm Victors & Spoils. Its total budget is $1.4 million, with $500,000 spent so far on campaign concepts, taglines, market research, creative design of ad materials, campaign guidance, video production and media purchases.

One ad piece takes a different spin on the slogan and reflects the diversity of the campaign: 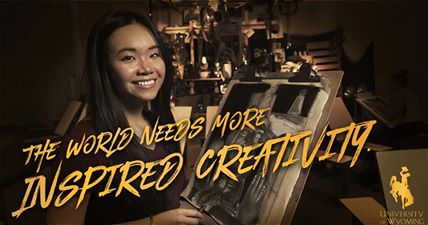 The university’s website has been adapted to include the campaign elements. We see its earthy brown and sunset orange colours, which might allude to Wyoming’s rugged mountainous landscape. The homepage now features the clever slogan “Bucking the system since 1886.”

The overall objective of the campaign is to help grow the university’s enrolment and raise its national and international profile. The university’s market research has found that the campaign has resonated, with more respondents indicating after watching the video that they would be interest in applying.

Some faculty and staff at the university and some Native American groups have said the motto excludes women and people of colour. They say the campaign makes the school look backwards.

The criticism has fueled a debate and led many to defend the campaign on social media. Supporters like the slogan because they view the characteristics of cowboys as positive.

The saying “all publicity is good publicity” may apply in this case. The controversy has given plenty of oxygen to the campaign. The school acknowledges all the media attention has been beneficial, which is partly why it released the video now instead of this September, as originally planned.

“Harnessing the positive energy resulting from the media coverage will help us roll out the campaign to a wider audience. Plus, we think it’s important for people to see the full context for the primary tagline as soon as possible,” said Chad Baldwin, Associate Vice President for Marketing and Communications.

I understand the criticisms about the campaign being too white male-centric. However, I think the video effectively shows that the University of Wyoming is trying to redefine what it means to be a cowboy, and demonstrate that anyone with curiosity and drive fits that role.

What do you think?